Argo City is the name of a prominent Kryptonian city, home to Zor-El and his wife Alura, as well as their daughter Kara. When Krypton was destroyed, Argo was one of two cities to survive its destruction (The other being Kandor, which was shrunken and abducted prior to the planet's destruction).

Argo was flung into space on a solid chunk of the planet which miraculously remained intact. The inhabitants began to attempt to survive, using their still-working machines to produce food and oxygen.

However, the chain reaction that had destroyed Krypton had also done molecular changes to the rock which they were stuck on; it began to slowly transform into Kryptonite, which was poisoning the population.

Zor-El managed to send his daughter to Earth before everyone died.

In this animated series, Argo was not just a city, but the name of Krypton's sister planet in the same solar system, which had a thriving colony of Kryptonians on it. In this version, General Zod had overthrown Argo instead of Krypton, and engaged in a reign of terror. He had been preparing a navy to invade Krypton when he was deposed by members of his own junta, who had thought he had gone power mad. His name would live on in infamy in Argo, with parents reminding their children "the General" would come for any bad kids. Years after Zod's ousting and the restoration of the Argoan republic, Kara Zor-El was born to Alura and Zor-El, and was the eldest of three daughters.

In this comic series, Argo is one of Krypton's moons, as opposed to being a sister planet or a city. It was somehow shunted into Quasi-Space, but was not destroyed. Supergirl was sent to Earth by accident, and is now trying to find a way home. 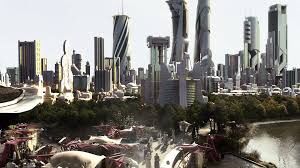