Brainiac 5, also known as Querl Dox, is a 31st Century descendant of Brainiac, as well as a member of the Legion of Superheroes. 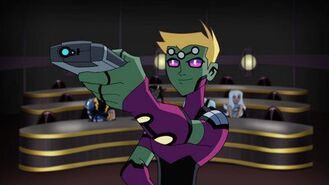 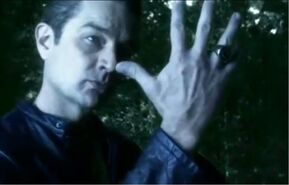 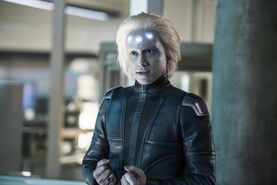 In the Legion of Superheroes animated series, Brainiac 5 is depicted as more of an artificial lifeform, like the original Brainiac, than the comics version. At the age of ten, he headed to the planet Earth, and worked at the Time institute, where he created the Time Bubble. After watching the Legion in action, he auditioned and passed with flying colours. He became known as "Brainy", and was the head engineer and inventor. He appears to be a big fan of Superman, although he denies this.

In the second season, he changes his appearence, taking on the look of an older youth. Near the end of the series, he becomes influenced by the original version of Brainiac, who takes over his mind in the final episodes. After defeating Brainiac, he emerges from an explosion fully organic, unaware of any powers. Ashamed of his actions, he left the legion. It is said that for the three years he as gone he was constantly avoiding Brainiac's many attempts to track him down, unable to contact anyone.