Jonathan Kent is the name of several characters in DC Comics. 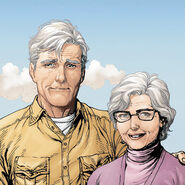 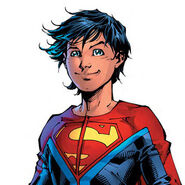 Whatever Happened to the Man of Tomorrow?

In this storyline, Superman permanently removes his powers, settling down with Lois under the alias of Jordan Eliott. They have a baby together, who they name Jonathan. Young Jon displays super strength by crushing coal into a diamond.

In this storyline, Jon Kent is a growing boy, the son of Lois Lane, whose father has been missing for some time. He begins to discover that he has super powers, and that his father is Superman. He then realizes he must rescue his father.

In the continuity following the Flashpoint event, Jon Lane Kent is the son of Superman and Lois Lane in an alternate future. His hybrid physiology was unstable. Jon became ill and die before his fourth birthday. Under these circumstance, the time traveling villain Harvest kidnapped and revived Jon, and trained him to become a Meta-Human killer and eliminate all the super-being of history. However because of Jon disease, Harvest was forced to create a clone, Superboy, to not only as possible replacement, but also to stabilize Jon's physiology.

Retrieved from "https://superman.fandom.com/wiki/Jonathan_Kent_(disambiguation)?oldid=30795"
Community content is available under CC-BY-SA unless otherwise noted.