Krypto is Superman's dog, a canine-like species from the planet Krypton.

As explained in his first appearance, Krypto was originally the toddler Kal-El's dog while they were on Krypton. Jor-El, testing prototypes for the rocket that would eventually send Kal-El to Earth, decided to use Krypto as a test subject. However, Krypto's rocket was knocked off-course; the rocket drifted through space for years until it eventually landed on Earth, where Krypto was reunited with the now-teenaged superhero, Superboy.

Like all descendants of Krypton under a yellow sun and lower gravity environment (vs. Krypton's red sun and heavy gravity), Krypto possessed the same powers and abilities as his master, although his physical abilities were proportionate to his smaller size and species, similar to an ordinary dog vs. a human. Krypto also had super-canine intelligence (approximately human level, though with his canine traits and interests still present); the comics expressed this via the use of thought balloons indicating what Krypto was thinking.

Krypto was drawn as a white dog of generic pedigree. When fighting crime, he usually wore a gold collar, a miniature facsimile of the famed Superman-"S" symbol for a dog tag, and a dog-sized version of Superman's cape.

When not accompanying Superboy/Superman, Krypto spent much of his time romping through space; while on Earth, however, he stayed with the Kent family, posing as their pet dog, "Skip". In that identity, his guardians applied a brown dye patch on his back for a disguise which Krypto could burn off with his heat vision when he went into costume.

Krypto had the distinction of belonging to not one but two organizations of super-animals; the 30th century Legion of Super-Pets, and the Space Canine Patrol Agency.

In the final (noncanonical) pre-Crisis Superman story, Alan Moore's Whatever Happened To The Man of Tomorrow?, Krypto sacrificed his life to save Superman by biting the throat out of the Kryptonite Man. The villain died, but Krypto was irradiated by him and died as well.

In Superboy #126 (Jan 1966) "Krypto's Family Tree", Krypto's father's name was given as Zypto, his grandfather as Nypto and his great-grandfather as Vypto.

Following the 1985-1986 Crisis on Infinite Earths limited series, Superman's history was extensively rewritten, initially eliminating all other survivors of Krypton in the revised version of his origin, including Krypto, so as to once again make the premise that Superman was truly the "Last Son of Krypton" a valid one. This rewrite has in fact been dubbed by some as "krypto-revisionism".

Eventually, however, Krypto (in several forms) was reintroduced to the Superman mythos, the first being as essentially an exact copy of the pre-crisis Krypto existing in a pocket universe created by the Time Trapper. In this early Post-Crisis storyline, Superman found himself in this pocket universe in which, similar to the Pre-Crisis Earth-Prime of Superboy Prime, his teenage counterpart was the only superhuman on Earth. Combating the genocidal forces of the three Phantom Zone criminals, this alternate Superboy had an intelligent Krypto counterpart as well, who heroically sacrificed his powers for his master. This was the same pocket reality from which the "Matrix" Supergirl originated.

The second modern Krypto was a small white pet dog, rescued, and later named by Bibbo Bibbowski. Originally, Bibbo had wanted to name the dog Krypton after Superman's home planet. However, the engraver of the dog tag (knowing that Bibbo had recently won the lottery) intentionally dropped the letter "n" ("Six letters or less for 1 dollar"), so he was trying to extort more money from Bibbo; an angry Bibbo refused to comply and renamed the dog as Krypto. Soon after, the dog found two people who had been trapped in a bomb shelter for a month following Superman's fight with Doomsday. They were barely alive but would make it.

He was later acquired by the modern Superboy, Kon-El; however, this version of Krypto was an ordinary Earth dog with no superpowers, and the dog and Kon-El didn't get along at all. The dog was eventually dropped from the series, remaining in Hawaii when Superboy returned to Project Cadmus.

The dog from Krypton

The third and more familiar version of Krypto was introduced in the early 2000s Superman comics, as a dog from a false, idealized Krypton (that coincidentally resembled the pre-Crisis Krypton) that was created as a trap by one of Superman's enemies; Superman was able to defeat the trap, and when he returned to Earth, Krypto followed him.

This new version of Krypto has all the physical abilities of his pre-Crisis predecessor, but with a normal canine intellect, which initially caused a great deal of trouble for his new master when, for instance, he would scratch at a door to indicate he wanted to go out and unintentionally gouged big chunks out of the door with his super-strength, or inflicting grievous bodily harm when combating villains (since Krypto bites the way a regular canine would, only without being careful about his super-strength). As a result, Krypto was for some time locked away in the Fortress of Solitude under the care of one of Superman's robots programmed to emit the scent of the dog's real master. Superman has gone to great lengths to train the dog, and he now occasionally accompanies the Man of Steel on missions. Batman never misses an opportunity to poke fun at Krypto when Batman and Superman don't see eye-to-eye.

Krypto had a surprisingly violent reaction to Kara Zor-El when he first encountered her. The dog happened upon the girl while she was exploring the Fortress of Solitude and attacked, going so far as to use his heat vision and other potentially lethal attacks.

Around this time Krypto operated on his own for a short period of time, helping out when disasters rocked the planet because of the plans of the invading Imperiex.

Some time later, Superman left Krypto in Superboy's care, saying that Smallville's open spaces were a better place for the dog, and that Superboy could use a friend (as shown in the 2003 Teen Titans #7). Their relationship had a shaky start, not helped by Krypto getting Superboy in trouble with the superheroine Starfire for destroying her alien garden.

However, they have slowly developed a close friendship, in which Krypto willingly does anything he can to protect Conner. One example of this loyalty was Krypto's quick defense of Conner from an outraged Superboy-Prime. Although Krypto was injured, this only strengthened his relationship with Conner.

With the death of Superboy during the Infinite Crisis limited series, it has not yet been revealed what has happened to Krypto and who cares for him in the current DC Universe, One Year Later. He was originally supposed to return in Superman #659, but it has been held up for unknown reasons.

In the Elseworlds story JLA: The Nail Krypto is an early product of an experiment in splicing Kryptonian DNA to Earth creatures. He has a huge distended eye and pseudopods emerging from his back, creating a resemblance to Starro.

In DC One Million, Krypto is a clone of the original and leader of the Legion of Executive Familiars in the 251st century. His Kryptonian powers have been increased to the ninth power.

A super-powered Krypto with a canine temperament appeared in All Star Superman #6. 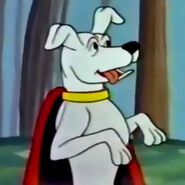 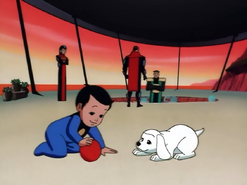 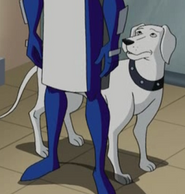 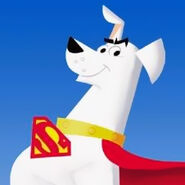 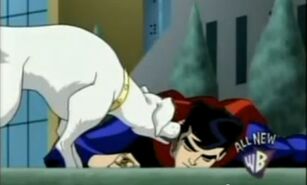 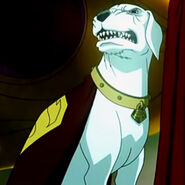 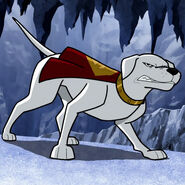 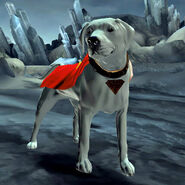 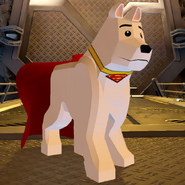 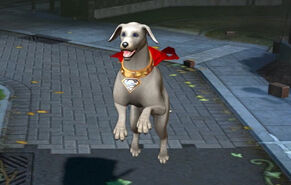 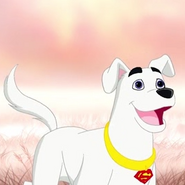 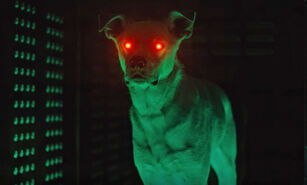 Titans
Add a photo to this gallery

Krypto's first appearance outside the world of comics was as a companion of Superboy in the 1966 television cartoon The New Adventures of Superman.

One scene of the Batman: The Animated Series episode "Deep Freeze" had a group of robotic toys which all resembled classic comic book characters, Bat-Mite, Mr. Mxyzptlk and Streaky the Supercat and one of the toys resembled Krypto. Krypto also appeared as a puppy on Krypton in the first episode of the 1990s Superman: The Animated Series, in the episode "The Last Son of Krypton: Part 1" although he is not named. In the episode "Bizarro's World", Bizarro enters the Fortress of Solitude and releases a number of alien animals kept there, including a reptilian creature he named Krypto. The animated series Legion of Superheroes has on more than one occasion featured creatures of the same design as Bizarro's Krypto, but larger.

In the Justice League Unlimited episode For the Man Who Has Everything Krypto appears as a pet of Superman's imagined son Van-El. This Krypto is depicted as having no powers (as he is still on Krypton) but otherwise looks similar to other versions of Krypto but without a costume.

In April 2005, Cartoon Network debuted Krypto in his own series, Krypto the Superdog, teaming him with fellow animal superheroes Streaky the Supercat, the Dog Star Patrol, and Ace the Bat-Hound. In this series, Krypto lives with a young boy in a Metropolis suburb, and fights crime against various foes, including a space cyborg feline named Mechanikat and his feline agents (including his sidekick, the evil genius alien kitten Snooky Wookums), the Joker's pet hyenas Bud and Lou, The Penguin's trained birds (Artie the Puffin, Griff the Vulture, Waddles the Penguin), Catwoman's cat Isis, and Ignatius, a pet iguana of Superman foe Lex Luthor. This version of Krypto shares the origin of the first Krypto, having been launched by Jor-El from Krypton in a similar turn of events, but he did not arrive till after Superman was already grown. Otherwise, the show is an original interpretation created just for this series, and is not based on any of the previous comic book versions. A noticeable change from the original is that this Krypto can talk, as can all of his other animal friends and enemies, and can be understood by his boy caretaker, Kevin, through the use of an ear-implanted translator. Krypto used to be a beloved dog, and Superman's best friend. In this continuity, Superman knows full well about Krypto's existence but he decided that it was best the dog stay with Kevin, especially after he realized how they had bonded already.

Krypto has yet to appear in an episode of Smallville. However, in episode 4-14 ("Krypto") of the 2000s television series Smallville, the show introduced a Golden Retriever with strength like Clark Kent's. This dog had originated from an experiment with Kryptonite. Clark Kent kept the dog, and considered naming him "Krypto" (Lois asked why that name, Clark responded it was because of his cryptic origins). Lois disliked the name telling him, "You can name your next dog Krypto". and he eventually named him "Shelby," after one of Martha's old dogs. Even though he was a male dog, Clark felt it was a better name over Lois' choice: "Clarkie."

A dog lives with Martha on the Kent farm in Superman Returns, but he is not named, nor is there any evidence that he is of Kryptonian origin. In fact the dog doesn't look like Krypto at all as he is a golden retriever there for it could be assumed that he must be Shelby or Rusty.

Super Pets print in the DCComics.com store
Add a photo to this gallery

Retrieved from "https://superman.fandom.com/wiki/Krypto?oldid=32155"
Community content is available under CC-BY-SA unless otherwise noted.