The Kryptonite Man, previously known as Kryptonite Kid, is a supervillain and frequent villain of young Superman (Superboy). He later returned to attack the fully grown Superman. He was originally a human boy whose body was so thoroughly infused with Kryptonite, that he began to emit its deadly radiation from his body, which now glows green. As his powers stem from exposure to Kryptonite, he may be considered a Meteor Freak.

There have been several different versions of Kryptonite Man throughout history.

The original Kryptonite Man started out as a teen-age criminal, who flew in space through a green kryptonite cloud and became imbued with the properties of kryptonite.

This incarnation is most well known pre-Crisis on Infinite Earths from his appearance and death in the non-continuity story Superman: Whatever Happened to the Man of Tomorrow?.

The Kryptonite Man appears in Superman Vol. 2 #43 as a green-skinned clone of Superman, grown by scientific spies Simyan and Mokkari.

A character in the ongoing series Superman/Batman also claims to be the Kryptonite Man. This version of the character seems to have come from the gigantic Kryptonite meteor which nearly destroyed Earth in the first issues of the series. He appears to be an energy being who can take over his enemies' bodies, temporarily infusing them with Kryptonite radiation. He first did this to Captain Atom, and later to Batman, in an attempt to kill Superman. ("Superman/Batman: Public Enemies")

Most recently, a scientist named K. Russell Abernathy was working on an experiment to use Kryptonite to develop a new energy-source when it exploded and infused his body with Kryptonite radiation. This somehow resulted in him being transformed into a new Kryptonite Man who battled with Supergirl while a powerless Clark Kent watched. After Supergirl contained him in lead she carted him off to the Metropolis Special Crimes Unit HQ where he was later kidnapped by Lex Luthor who held him hostage while using him as an energy source. ("Up, Up and Away!")

Ramsay was recruited by Dr. Abernathy, who was working for Lex Luthor, to become infused with Kryptonite radiation. Ramsay was chosen because of his hatred for Superman, who had previously taken Ramsay's wife away from him because he was physically abusive to her. He underwent the procedure, despite its liklihood of killing him.

He battled Superman, who finally defeated him with the help of Steel and a radiation suit. He was taken into custody, where General Sam Lane offered to train him as an official countermeasure against Superman should he go rogue. ("Vulnerable") 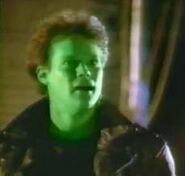