LexCorp (NYSE: LEX,) is an American global aerospace, defense, security and advanced technologies company with worldwide interests. It is headquartered in Metropolis. LexCorp employs millions of people with facilities in over thirty different countries on all seven continents. The President and CEO of LexCorp is billionaire industrialist Lex Luthor.

While still in its original offices on the top floor of Metropolis' famed Daily Planet building, LexCorp made its first acquisitions of two then-struggling airlines, Inter-Continental Airlines and Atlantic Coast Air Systems (since renamed LexAir). As LexCorp subsidiaries, the airlines began to prosper. And when rising profits were threatened by fuel shortages, LexCorp bought out Southwestern Petroleum, now known as LexOil.

For a brief period, the Daily Planet itself came under the ownership of LexCorp, but Luthor quickly became disenchanted with what he considered the low profit margins of the newspaper business. He moved LexCorp's offices into a new high-rise building and began buying up downtown properties in preparation for the day when LexCorp would build its own corporate headquarters. LexCorp soon bought out a Metropolis television station and acquired a satellite transmission company, linking both under the corporation's new LexCom subsidiary as SuperStation WLEX. With a potentially worldwide electronic communications out-let under the LexCorp umbrella, Luthor soon sold the Planet, building and all, to TransNational Enterprises.

In time, LexCorp gained controlling interest in no fewer than three banks - the Metropolis Mercantile Bank, Commerce Bank of Metropolis, and First Metro Security - and moved into all the major financial markets, absorbing new holdings worldwide.

By the time frame of the Alliance Invasion, LexCorp dominated the commerce of the city - and, indeed, of much of the world - from the 96-story L-shaped building LexCorp Tower which towered above the Metropolis skyline from the eastern tip of the borough of New Troy. It was estimated that LexCorp at its height, either directly or indirectly, employed nearly two-thirds of the city's 11 million people. A majority of local businesses were wholly- or partially-owned subsidiaries of LexCorp. Among those many subsidiaries are such diverse businesses as Advanced Research Laboratories, Secur-Corp Armored Car Service, North American Robotics, Hell's Gate Disposal Services, and the Good Foods Group, owners of Ralli's Family Restaurants and the Koul-Brau Breweries.

In addition to its many properties in the greater Metropolis area, LexCorp has domestic holdings in Los Angeles, Denver, Houston, New Orleans, Chicago, Gotham City, and Boston. LexCorp currently maintains financial institutions, research facilities, refineries, and/or manufacturing plants in a score of countries, including Australia, Venezuela, Argentina, Brazil, Germany, Switzerland, France, the South Africa, Saudi Arabia, Japan, Singapore, UK and Hong Kong. When CEO Lex Luthor was elected President of the United States, Talia al Ghul took over the company. Following his dismissal as president, he unofficially fired her and took back his place, unaware that she kept a portion of stock from him.

A year after the events of Infinite Crisis, Lex Luthor has been stripped of his wealth, assets, and businesses and is reduced to living like a vagrant. LexCorp has had its stocks dissolved and sold off to other companies, most notably Wayne Enterprises. Talia Head donated a large portion of its profits to the Wayne Foundation during Superman and Batman's year long absences.

Lana used LexCorp's resources to assist Superman on an urgent matter, and as such, she found herself in violation of her contract which forbade her from aiding and abetting Superman in any and all matters. As such, she was terminated from the company. 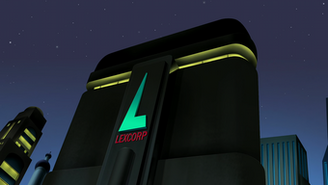 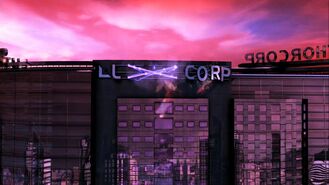 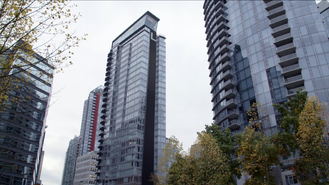 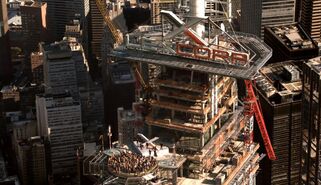 Batman Vs Supermam: Dawn of Justice 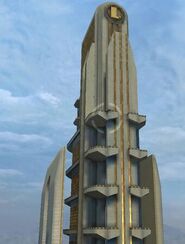 DC Universe Online
Add a photo to this gallery
Retrieved from "https://superman.fandom.com/wiki/LexCorp?oldid=33578"
Community content is available under CC-BY-SA unless otherwise noted.