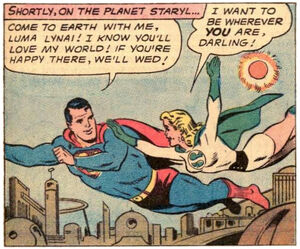 Luma Lynai is a Superwoman from the planet Staryl, and a love interest of Superman.

Superman first met her when Supergirl tried to find a mate for the lonely Superman. After match-making attempts with Helen of Troy and an adult Saturn Girl fail, Supergirl uses the computer in the Fortress of Solitude and discovers a super-powered woman on the distant planet of Staryl named Luma Lynai.

Superman flies to Staryl and the two heroes immediately fall in love, with Superman remarking after a string of failed relationships he figured he has found his dream girl. Supergirl is privately happy that she has been a successful matchmaker for Superman, but has her uneasy reservations. As Luma Lynai had shoulder-length blonde hair, as well as being a superpowered woman who wore a leotard and cape, Supergirl wondered if this was in fact herself as a full-grown woman. Unfortunately, Superman discovers that Luma Lynai's powers only work under the rays of an orange sun; Earth's sun yellow rays are as deadly to her as kryptonite is to Superman. Luma, realizing that Earth needs Superman, tells him he must leave. ("Superman's Super-Courtship!")

In a later reprint of the story, Luma's home star is shown as being blue, since at the time of the reprint Superman's powers were now being depicted as much weaker under an orange sun.

Retrieved from "https://superman.fandom.com/wiki/Luma_Lynai?oldid=33561"
Community content is available under CC-BY-SA unless otherwise noted.