Mercy Graves is a character from Superman: The Animated Series, voiced by Lisa Edelstein.

A tough young woman with a checkered past, Mercy serves as Lex Luthor's personal bodyguard and chauffeur. Originally the leader of a gang of girl thieves, Mercy once daringly swiped Luthor's briefcase from under the billionaire's nose. She did not get far before Luthor's men hunted her down. However, rather than take revenge, Luthor, impressed by her mixture of ruthlessness and street savvy, offered her a job. He took her in, cleaned her up, and made her his right-hand woman.

Though she usually relies on cool and sardonic wit as her first form of defense, Mercy is an absolute demon in a fight, using a rough, street-form of kickboxing as her preferred form of attack. She can take anyone this side of Superman in one-on-one combat and is an expert with most forms of handheld weapons.

Mercy is loyal and respectful to Luthor, but never servile. She claims to be "the only one in Luthor's entire company who can get away with calling him Lex". In the Superman episode "Ghost in the Machine," Mercy teams up with Superman to find the missing Lex Luthor. Superman tries to convince Mercy that Luthor does not actually care for her; Mercy tries to prove him wrong. However, after a battle with Brainiac, Mercy is pinned under a pile of fallen machinery while the room caves in. Although Luthor could have saved her, he flees instead, leaving her to die. This is the only episode of Superman: The Animated Series to prominently feature the character.

When Mercy reappears later in Justice League ("Tabula Rasa"), the nature of their relationship becomes more clear. Mercy has agreed to take over LexCorp while Luthor is in prison, and is hesitant to return it to him because she feels their former relationship was not an equal one. Luthor exacerbates the situation by verbally and physically abusing her. It is repeatedly implied that their relationship was not solely platonic. Mercy assists Luthor's escape from the Justice League. However, after his capture she hangs up on him during his single phone call when he requests help in obtaining a lawyer and doctors to treat his kryptonite cancer. However, in the episode "Clash", Mercy takes orders from Lex again.

Mercy appears in Superman: Doomsday, voiced by Cree Summer. In the movie, she watches a project with Luthor that involves LexCorp secretly, and illegally, digging deep underground, where they accidentally unearth the villain Doomsday. Lex tells Mercy to make sure that all evidence of LexCorp's involvement never existed. When Doomsday and Superman kill each other in an epic battle, Lex loses his chance to be responsible for Superman's death, both directly and indirectly through Mercy's destruction of the evidence. Once Mercy informs him that there's no link back to LexCorp, he kills her.

In the episode The Batman/Superman Story, Part One of The Batman, Mercy appears again as Lex's right hand, only this time she appears to be of Asian descent, and is voiced by actress/musician Gwendoline Yeo.

Mercy appears in comics as Luthor's bodyguard, joined by another hired muscle named Hope. The two might be Amazons, as they have exchanged blows with Superman. This possibility is referenced when the sorceress Circe approaches President Lex Luthor's White House. Hope and Mercy inform Circe that they can always recognize her, no matter what disguise or form she might take, suggesting the kind of previous familiarity which Amazons might possess.

Although Hope's time as a LexCorp employee has passed, Mercy can still be seen with the fugitive Lex Luthor after he is driven from the Presidency.

In the series 52, Mercy is seen alongside Luthor at the unveiling of his "Be Your Own Hero" program, and is shown in Luthor's employ in 52 Week 40.

First introduced in the Superman: The Animated Series, Mercy's transition to comic books is similar to Harley Quinn's. Harley, The Joker's sidekick from Batman: The Animated Series, later appeared in comics. In World's Finest, "The Batman/Superman Movie", the two are rivals, culminating in a ferocious fight that goes on while the Joker and Luthor civilly discuss business. A Mercy-Harley fight is featured in Action Comics #765 (May 2000). 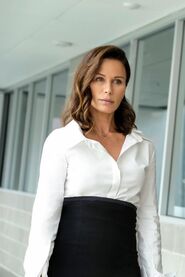 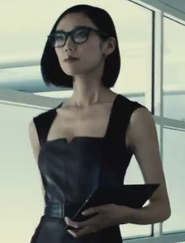 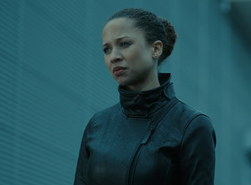 Natalie Gumede
Titans
Add a photo to this gallery 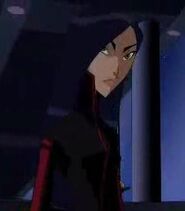 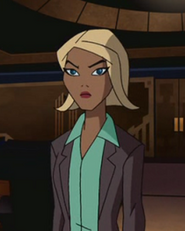 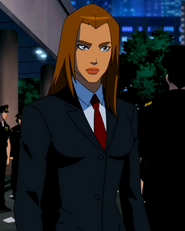 Young Justice
Add a photo to this gallery

Retrieved from "https://superman.fandom.com/wiki/Mercy_Graves?oldid=33068"
Community content is available under CC-BY-SA unless otherwise noted.