Nicolas Cage was cast as Clark Kent/Superman in Tim Burton's cancelled Superman film. Although the project has captured the public's imagination, he declined to appear in the 2015 crowdfunded documentary.

Cage got his second chance when he agreed to do a cameo voiceover for Superman in the animated film, Teen Titans Go! To the Movies in 2018.[1]

Cage is a noted fan of superhero comics, and previously owned a copy Action Comics #1.

In April of 1998, Cage appeared on the Tonight Show with Jay Leno, where he explained that a child convinced him that Superman needed red trunks, previously he had been against the trunks while developing the movie. 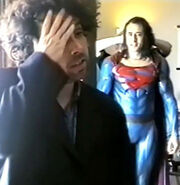 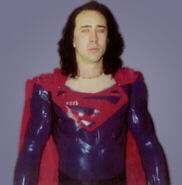 Retrieved from "https://superman.fandom.com/wiki/Nicolas_Cage?oldid=31871"
Community content is available under CC-BY-SA unless otherwise noted.