Nightwing and Flamebird are a pair of Kryptonian gods who have inspired a number of superhero teams.

The true Flamebird is a massive, flaming dragonlike creature from deep in Krypton's past. The bird's partner is Nightwing, who is also its mate and opposite.

Among the early Kryptonian Gods, Flamebird was charged by almighty Rao with constantly refreshing the world by burning down the new creations of her brother, Vohc-The-Builder. She did so, but there was no hostility between the two; Vohc was grateful that Flamebird constantly pushed him to reimagine his works. The two dieties were in love for a time.

However, to help his friend, Nightwing, Vohc made it possible for him to meet flamebird. As such those two fell in love. Vohc's next creation was a monument representing all of his love for Flamebird. While Flamebird truly admired and appreciated the work, she fulfilled her duty to Rao by burning it down. This time Vohc actually begged for this work to be saved, but Flamebird ignored him. This destroyed much of Vohc and changed him into Vohc-The-Breaker. (Comic Series: Action Comics)

In the Pre-Crisis timeline, Superman and Jimmy Olsen used the names to conceal their identities while visiting the bottled city of Kandor.

He's also the father of Thara Ak-Var, who would later become Flamebird.

In the "Return to Krypton" storyline, Superman and Lois Lane took on the characteristics of Nightwing and Flamebird to survive on Krypton.

When Kara Zor-El visited the bottle city of Kandor with Power Girl, the two took on the identities of Nightwing and Flamebird, to combat a False Superman who had taken over the city. Kara was the fourth to call herself Flamebird.

The current Flamebird is Thara Ak-Var. She survived the destruction of Krypton by living on Argo City. However, her parents were killed.

She eventually found her way to the Religious Guild for a time, and there, found the legacy of Flamebird. The more she looked into this, the clearer it became to her that Flamebird lived in her, and that she needed to find her Nightwing.

She rescued Christopher Kent from the Phantom Zone, and the two took on the identities of their legendary dieties. They also fell in love, as is the legend about them. (Comic Series: Action Comics) 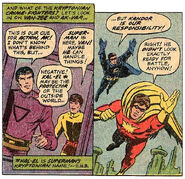 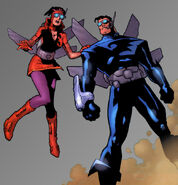 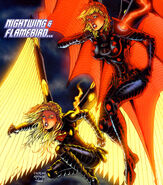 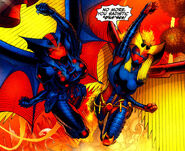 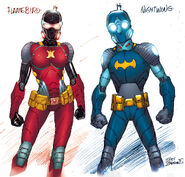