Rao, also known a Eldirao, and known to Earth astronomy as LHS-2520, is the name of the red sun around which the planet Krypton orbits. Rao is also the name of the personification of that sun, who the Kryptonians worship as a god of light and life, similar to God in Christianity.

The sun was created by a race of gaseous beings called the Sun-Thrivers who drew matter from far galaxies. However, the sun was unstable, so the Sun-Thrivers created planets out of solar matter, using their collective gravity to stabilize the turbulent sun storms. Of all the planets in orbit, Krypton was the most powerful.[1][2]

Rao was given the idea by Despair of the Endless-another deity, controlling all despair-- to allow the civilization of Krypton to flourish, and then for the planet to be destroyed; and for only one inhabitant to survive. This was considered to be "artful". ("The Sandman: Endless Nights")

It has been suggested that there is a direct lineage between Rao and the house of El. That is to say, that Jor-El and Superman and their entire family may be descended from the god of their people.

Rao is located about 27 light-years from Earth, at LHS-2520. As such Neil Degrasse Tyson was able to organize a worldwide collaboration to use many telescopes in conjunction to get a high-quality image of Krypton's destruction. ("Star Light, Star Bright") 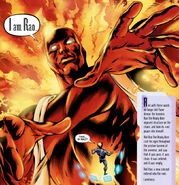