The Rao System is the planetary system that is home to the planet Krypton, throughout the various continuities and versions the system has varied significantly.

The amount of planets and celestial bodies varies greatly throughout different continuities, realities, and timelines. Post-Crisis on Infinite Earths the planetary system was established as having five planets within it.

The location of the solar/planetary system has varied dramatically from continuity to continuity. Sometimes the system is as few as 20 light years distance from earth, and other times in completely different galaxies. Every location will be listed here with the source material to avoid confusion as much as possible.

Argo - Typically Argo in most continuities is a city on Krypton, in Superman: The Animated Series (and accompanying DCAU tie-ins) it is a planet seemingly within the same orbit of Krypton on the opposite side of Rao (the Superman Adventures comics state it is the fourth planet from the sun). It is inhabited by a humanoid people called the Argoans who are largely identical to Kryptonians.

In Superman Returns, a sequence in which Superman journeys to his home planet was cut from the film. When he reaches the former location of Krypton, all he finds is debris. A number of concept pieces were developed for the scene, and some footage was shot. 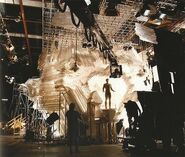