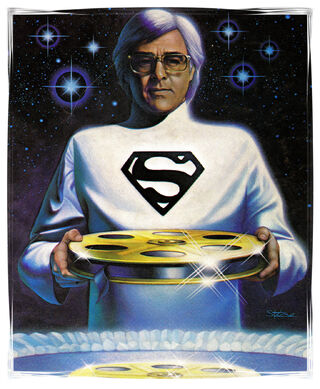 Richard Donner is a film director, and producer through via "The Donners' Company," which he and his wife, producer Lauren Shuler Donner, own.

Although known for The Omen and the Lethal Weapon films, he is most famous for the hailed creation of the first modern superhero film, Superman, starring Christopher Reeve. The influence of this film eventually helped establish the fantasy genre as a respected film genre.

His break-through film was in 1976 with The Omen, produced in the 'horror boom' following The Exorcist.

He followed it with the hit Superman in 1978. Armed with two scripts for Superman:The Movie and Superman 2 he shot principal photography for both films to save on set dressing and actor/crew overheads. However, the original ending on film 1 where Superman flew from accident to disaster was deemed to be missing a certain something by the film's independent financers Ilya and his father Alexander Salkind. The scripted time reversal ending of Superman 2 was taken to pad out and fulfill Superman:The Movie once the film had been identified as a priority with a view to piece together an alternative end to the second film later. After the first film's successful release Donner was offered the directors role a second time but demanded that his trusted editor Stuart Baird be part of the deal. This posed a problem for Ilya Salkind as his child hood friend John Victor-Smith who had a working relationship with the Salkinds on The Three Muskateers and The Four Muskateers was already engaged to complete film two. The decision to remove him from the film series, made by producers Alexander Salkind and Ilya Salkind, has been widely viewed by many fans as a huge mistake on the Salkinds' part, as the subsequent Superman films helmed by their preferred director Richard Lester, while still breaking the $100m mark for domestic USA alone were perceived as being of poorer quality and quickly resulted in a downward spiral in popularity for the series. The demands of Marlon Brando to receive the same percentage of cut for film two as he received for film one regardless of how much previous footage used exacerbated the Salkinds position to at least walk away from a, by that time, five year project with profit as Superman:The Movie was still un-officially paying back creditors. A no flexibility attitude from both Brando and Donner saw both removed from the series until 2006 when Donner's definitive (or at least, as close to definitive as possible) version of the movie, simply entitled Superman II: The Richard Donner Cut was released on November 28, 2006 on the same date as to the DVD release of the summer hit, Superman Returns. The footage includes never-before-seen footage of Marlon Brando, a new opening, a new ending and approximately 83% of Donner footage. Some Richard Lester footage was used to tie in loose ends. Michael Thau, the editor of the Richard Donner cut also made some minor use of CGI. However, he did not create CGI villains in order to complete the "villains rule the world scene" which was in the original script, but was never shot by Donner.

Donner has mixed commercial flops (Inside Moves, Radio Flyer) and successes (The Goonies, Lethal Weapon) since then. His legendary Ladyhawke (1985) ranks somewhere in the middle but has enjoyed a large cult following. Donner has received little critical appreciation, although he has a strong following amongst genre fans. In the case of Superman, it was Donner who insisted the subject of the comic book superhero should be treated "straight" rather than "camp", an approach that strongly influenced later genre directors such as Bryan Singer and Tim Burton who have made successful superhero films of their own. The influence of Superman: The Movie can, to this day, be seen in superhero films outside the Superman storyline, and even outside the DC Comics universe. Sam Raimi's Spider-Man film is debatably one of the strongest examples of that influence. [1] In the early 1980s, Donner proposed to Warner Brothers a non-camp film version of Batman, to star Mel Gibson.

Richard Donner's cousin is actor Steve Kahan, who played the policeman tracking Otis in Superman: The Movie, and played Captain Ed Murphy in the Lethal Weapon movie franchise. Donner has cast Kahan in some of his other films too.

Verisimilitude
Add a photo to this gallery
Retrieved from "https://superman.fandom.com/wiki/Richard_Donner?oldid=32798"
Community content is available under CC-BY-SA unless otherwise noted.