Streaky, sometimes referred to as Streaky the Supercat, was Supergirl's pet cat who sometimes had Kryptonian powers and fought alongside his owner.

Streaky's powers consisted of a smaller subset of those of Superman and Supergirl, including flight, super-strength, super-vision, and super-speed.

Supergirl was experimenting on a piece of green kryptonite in an attempt to find a way to neutralize its deadly effects. When her experiment failed, she tossed the kryptonite (or "X-Kryptonite", as it became known as) out the window. Though her experiment failed, her pet Streaky came across the X-Kryptonite, and was exposed to its radiation. As the comics described it: "Due to the unique combination of chemicals in X-Kryptonite, it has given Streaky superpowers!" ("Supergirl's Super Pet!")

Streaky made sporadic appearances in comic stories through the 1960s, and even became a member of the Legion of Super-Pets, a group consisting of the superpowered animals mentioned above.

Streaky's last pre-Crisis on Infinite Earths appearance was in June 1970's Adventure Comics #394. Presumably, when all of Earth's kryptonite was transformed into iron in Superman #233 in 1971, Streaky's X-Kryptonite power source was eliminated as well, ending his super-career and returning him to the life of a normal housecat again.

During Grant Morrison's run in Animal Man, an alternate, grey-furred Streaky (which, however, left an orange contrail with the telltale lightning bolt marking) made a brief appearance as one of the pre-Crisis characters that were returned to reality by the Psycho-Pirate's Medusa Mask. This alternate Streaky attacked "Overman," an evil parallel universe Superman with his heat vision before being hurled out of the asylum. Presumably, this Streaky vanished from existence when the Psycho-Pirate's episode of madness ended, along with his human counterparts.

Various cats inspired by (and sometimes named) Streaky have made appearances in the post-Crisis DC Universe, but none so far have acquired superpowers. In Peter David's Supergirl series, a particular cat named Streaky, whose identical to the pre-Crisis version, jumps from a tree (as if trying to fly) before being saved by Supergirl and returned to its owner, saying the town of Leesburg isn't "ready for a flying kitten." The cat appeared in issues 25 and 42.

At the 2007 New York Comic Con, when asked if Streaky would be returning, Paul Dini said that the “cat’s out of the bag”. [1]

In Supergirl #10, it is revealed Kara has a female pet cat. In #14, it's revealed that the cat's name is Streaky because "she doesn't get the concept of the litter box." 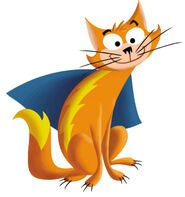 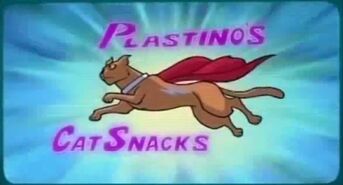 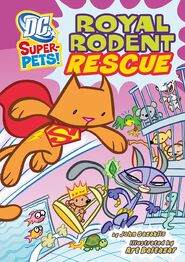 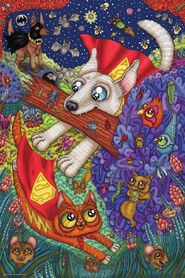 Streaky in Krypto the Superdog

In this series, Streaky the Supercat is a cat who lives next door to Krypto and Kevin's family. In episode 3, "The Streaky Story", Streaky gained superpowers by a duplicating ray that was aimed at Krypto, but reflected off of him and hit Streaky instead; Streaky later found that he had superpowers similar to Krypto's.

Streaky belongs to a girl named Andrea. Unlike Krypto, Streaky is less serious about his superhero activities, and sometimes needs prodding to perform heroic deeds, but usually is dependable. Brian Drummond is the voice behind Streaky.

This Streaky is similar to the comics' version, except that he talks, and that he belongs to a human named Andrea instead of to Supergirl.

Streaky makes a cameo appearance in the first episode of this new Batman series in a cat food commercial.