Super Friends is the umbrella title under which a number of incarnations of DC superheroes cartoons aired from 1973 to 1985.

Super Friends! Season One, Volume One 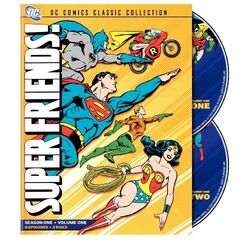 released on VOD as Season 1 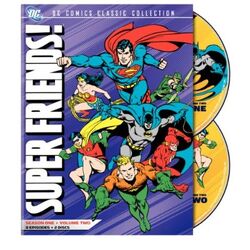 released on VOD as Season 1

The All New Super Friends Hour: Season One Volume One 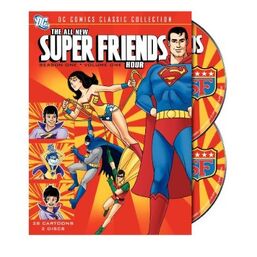 released on VOD as Season 2

The All New Super Friends Hour: Season One Volume Two 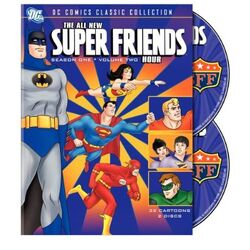 released on VOD as Season 2

Challenge of the Super Friends: The First Season 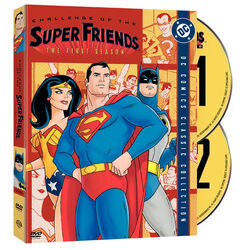 released on VOD as Season 3 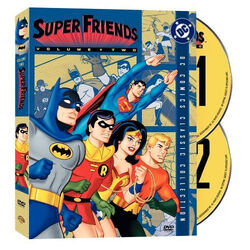 Disc 1
01) Rokan: Enemy from Space
02) The Demons of Exxor
03) Battle at the Earth's Core
04) Sinbad and the Space Pirates
05) The Pied Piper from Space
06) Attack of the Vampire
07) The Beasts are coming
08) Terror from the Phantom Zone
Disc 2
09) The Anti-Matter Monster
10) World Beneath the Ice
11) Invasion of the Brain Creatures
12) The Incredible Space Circus
13) Batman: Dead or Alive
14) Battle of the Gods
15) Journey through inner space
16) The Rise and Fall of the Super Friends 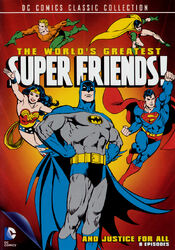 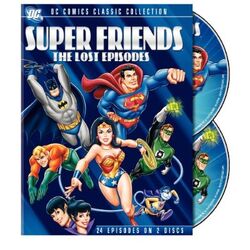 released on VOD as Season 6 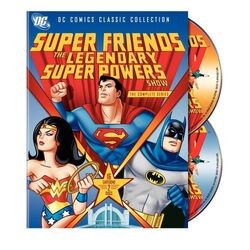 released on VOD as Season 7 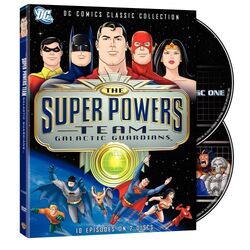 released on VOD as Season 8 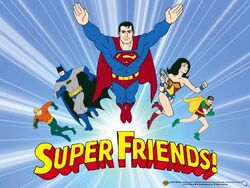 released on DVD as Super Friends! Season One, Volume One and Volume Two

1. The Power Pirate
Anthro, from the planet Traum, disguising himself as a special inspector from Scotland Yard, enlists the help of the Superfriends to help him steal the Earth's energy to take back to Traum.

2. The Baffles Puzzle
Professor Baffles has embarked on a crusade to destroy all literature, art and music with a chemical he has developed. His two accomplices use Professor Baffles' crusade to extort money from the U.S. government.

3. Professor Goodfellow's G.E.E.C.
Professor Goodfellow invents the G.E.E.C. (Goodfellow's Effort-Eliminating Computer) to free mankind of all physical labor, brainwork and responsibility. However, when this miracle-of-the-ages computer goes out of control, it takes the combined efforts of all the Superfriends to repair the computer and return the world to its normal state.

4. The Weathermaker
Glaciers are melting, gigantic whirlpools are forming and there are icebergs in the South Atlantic. Then the Superfriends chart these drastic changes in weather, a pattern soon begins to emerge.

5. Dr. Pelagian's War
The nation's three leading industrialists receive a warning from a computerized albatross, "Listen to the voice of Dr. Pelagian, you have one hour to stop pollution of the seas, before the sea strikes back!" The Superfriends must get the three stubborn industrialists to meet with Dr. Pelagian before his tactics endanger the country.

6. The Shamon 'U'
Dr. Shamon uses a gigantic magnetic "U" to draw a solid gold meteorite to the Earth. However, he is unaware of the fact that his "sky-mining" technique has released some exotic gases from the space cloud, which, when united with the oxygen in Earth's atmosphere, form a green mist and a red mist.

7. Too Hot To Handle
The Superfriends are told by the government's leading scientist that a strange new wave of magnetism is drawing the Earth from its orbit toward the sun. They must discover what is causing the increased magnetic pull and stop it.

8. The Androids
As the Superfriends watch the launch of Apollo 20, neither they nor the government know that the astronauts aboard have been replaced by androids.

9. The Balloon People
A family of balloon people, from the planet Balunia, are befriended by the Superfriends after their flying saucer lands on Earth. However, the news reports of these unusual guests prompt the ambitious scholar, Noah Tall, to devise a plan to capture the balloon people.

10. Fantastic Frerps
King Plasto has been intercepting every shipment of raw plastic powder on its way to the government space research station because he intends to use the raw powder for his own means.

11. The Ultra Beam
A "blue ray" emitting an ultra-beam has been extracting tiny electrical particles called quarks, turning the gold remaining in the earth into a worthless residual metal. The Superfriends tour various mining regions hoping to find an answer to this phenomenon when they see the mysterious blue jet and the ultra-beam.

12. The Menace Of The White Dwarf
A strange UFO penetrates earth's airspace. Along its flight path, it has managed to "pull up" and carry along a number of objects. Col. Wilcox explains to the Superfriends that the UFO snatched up a total of fourteen thousand tons.

13. The Mysterious Moles
Important research projects have been closed down and the Superfriends are called in to find and restore missing air conditioning units.

14. Gulliver's Gigantic Goof
Dr. Gulliver uses his micro-wave reducer to shrink every adult human being in the world down to an economical, convenient size of 2" tall. He will remain full-sized to rule and watch over the mini population of the world.

15. The Planet Splitter
An ingenious scientist, Dr. Laban, has stolen the largest diamonds in the world to power his "planet splitter." While the Superfriends guard the remaining diamonds in the world, Wendy and Marvin follow Dr. Laban to his secret laboratory, where Laban tells them of his plan.

16. The Watermen
A strange spacecraft has been forced to land on Earth after a meteor hit the fuel tank of the craft. The craft, in an attempt to return to the planet Sagittarius, begins gathering silicon from sea water to fuel their ship. However, extracting the silicon causes a red tide and famine among ocean creatures. 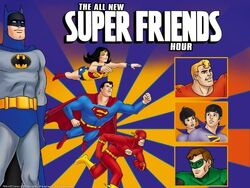 released on DVD as The All New Super Friends Hour: Season One Volume One and Volume Two

3. The Marsh Monster / The Runaways / Will the World Collide? / Time Rescue
The Super Friends rush to the scene of "The Marsh Monster". Then, the Wonder Twins work to save "The Runaways". Next, the Super Friends must act quickly in "Will the World Collide?" Lastly, Hawkman, Hawkgirl and Superman race to complete a "Time Rescue."

6. The Secret Four / Tiger on the Loose / Voyage of the Mysterious Time Creatures / The Antidote
The Super Friends search for "The Secret Four". Then, the Wonder Twins help when a "Tiger on the Loose." Next, the Super Friends intervene in "Voyage of the Mysterious Time Creatures". Finally, Wonder Woman and Apache Chief must find "The Antidote".

7. The Enforcer / The Shark / Planet of the Neanderthals / Flood of Diamonds
The Super Friends provide aid in "The Enforcer." Next, the Wonder Twins rescue two boys in "The Shark." Later, the Super Friends stop a madman in "Planet of the Neanderthals." Lastly, Green Lantern and Aquaman save miners trapped in a "Flood of Diamonds."

8. The Invisible Menace / Initiation / The Coming of the Arthropods / River of Doom
The Super Friends investigate "The Invisible Menace". Next, the Wonder Twins intervene an "Initiation". Later, the Super Friends unite to stop "The Coming of the Arthropods." Finally, Wonder Woman and Rima aid geologists sentenced to the "River of Doom."

11. The Fifty Foot Woman / Cheating / Exploration: Earth / Attack of the Killer Bees
The Super Friends save the country from "The Fifty Foot Woman." Later, the Wonder Twins help a boy learn about "Cheating." Then, the Super Friends face "Exploration: Earth." Lastly, Samurai and Aquaman save a village from an "Attack of the Killer Bees."

15. The Protector / Stowaways / The Ghost / Rampage
Aquaman, Batman and Robin stop a pirate in "The Protector". Next, the Wonder Twins rescue two "Stowaways". Then, the remaining Super Friends must combat "The Ghost". Lastly, a sacred elephant goes on a "Rampage" and Superman and Aquaman must investigate. 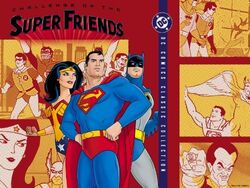 released on DVD as Challenge of the Super Friends: The First Season

1. Wanted: The Superfriends
Lex Luther's new invention controls the dreams of the Super Friends, forcing them to commit incredible crimes.

2. Invasion of the Fearians
The Legion of Doom teams with the Fearians, an advanced race from the planet Venus, to take contol of Earth.

3. The World's Deadliest Game
To Blackmail the nations of the world, the Legion of Doom traps the Super Friends in a black hole.

4. The Time Trap
Grodd devises a plan to rob the world's greatest historical treasures - and trap the Super Friends in time.

5. Trial of the Super Friends
The Legion of Doom plots to use a newly developed "liquid light" for their own evil purposes.

6. The Monolith of Evil
With the unwitting aid of the Super Friends, the Legion of Doom gains control of a superpower source - a monolith buried deep in the Earth's core.

7. The Giants of Doom
The Legion of Doom uses the Super Friends' computer to create a ray that turns the villains into giants.

8. Secret Origins of the Super Friends
The Legion of Doom alters the past so that the three most powerful Super Friends never existed.

9. Revenge of Gorilla City
The Legion of Doom captures a futuristic city populated by an advanced race of gorillas.

10. Swamp of the Living Dead
An evil entity offers the Legion of Doom an unbeatable army of the living dead.

11. Conquerors of the Future
The Legion of Doom schemes to rule the world with the help of an evil race from the future.

12. The Final Challenge
The leader of another universe subjects members of the Legion and the Super Friends to contests to determine which group he will eliminate forever.

13. Fairy Tale of Doom
With Toyman's help, the Legion of Doom transports three of the Super Friends into the pages of three storybooks, where they will remain forever unless they escape within 12 hours.

14. Doomsday
After escaping from the Hall of Justice, three members of the Legion of Doom seek revenge on the other Legion members for not attempting to rescue them.

15. Super Friends: Rest in Peace
The Legion of Doom discovers a cache of noxium, a compound containing all the elements capable of destroying the Super Friends.

16. The History of Doom
Investigating the destruction of Earth, aliens trace the responsibility to the Legion of Doom and undo the damage by turning back time. 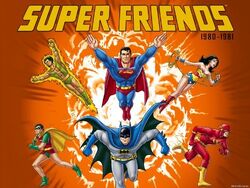 1. Big Foot / The Ice Demon / The Make-Up Monster
First, the Super Friends are summoned when ten-foot-tall "Big Foot" creatures suddenly capture the Apache tribe. Then, the Wonder Twins are in danger when they uncover "The Ice Demon." Later, Batman, Robin and Flash must stop "The Make-Up Monster,".

4. One Small Step From Mars / Haunted House / The Incredible Crude Oil Monster
In "One Small Step From Mars," the Super Friends outwit three criminals who've escaped from a prison. Then, the Wonder Twins search for two boys trapped in a "Haunted House." Lastly, Aquaman, Hawkman and Hawkgirl battle "The Incredible Crude Oil Monster." 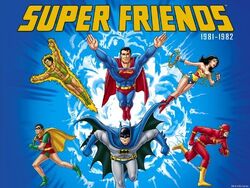 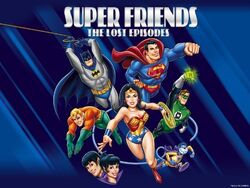 released on DVD as Super Friends: The Lost Episodes

2. The Krypton Syndrome / Invasion of the Space Dolls / Terror on the Titanic
When Superman accidentally returns to Krypton's past in "The Krypton Syndrome." Then, the Wonder Twins thwart the impending "Invasion of the Space Dolls." Lastly, "Terror on the Titanic" occurs when the legendary ship is raised from the bottom of the sea. 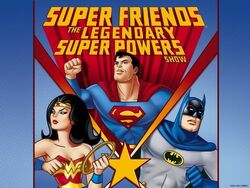 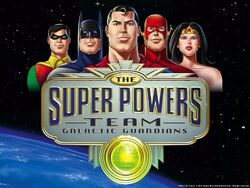 released on DVD as The Super Powers Team: Galactic Guardians

4. The Fear
The Scarecrow unnerves Batman by forcing him to remember the death of his parents in "The Fear."