Superboy, also known by his Kryptonian name Kon-El and his human alias Conner Kent, is a Hybrid human/Kryptonian, cloned from Superman and his archnemesis Lex Luthor, and is a modern update of the original Superboy, who is a younger version of Superman.

This section details Superboy's history in the current Comics continuity, that of the New 52. For his biography in the Modern Age continuity (1985-2011), see Superboy's Biography (Modern Age).

Harvest's origins are explored, revealing he was a colonel who battled meta-humans. His son killed by a meta-human inspiring his hatred for them. Harvest vowed to kill all metas and traveled back in time to take Jon Lane Kent, son of Superman and Lois Lane, who was in a state similar to death due to his genetic instability. Harvest rescuciated Jon and trained him to keep Meta's in check. When Jon became a teenager, the genetic instability effected him again. Harvest traveled back in time to forge a cure using, the genetic materials of Jon's parents to create Superboy. With Superboy's genetics, Harvest succeeds in reviving Jon.

In the Titans Tomorrow, a possible future version of Conner Kent was introduced. This version has grown up and grown more powerful: His tactile telekinesis has increased to the point where he is able to create shields in addition to his fully developed Kryptonian powers. He has set up the Fortress of Paradise near Smallville, where Lex Luthor, his "Pa", now resides. At some point, he and Captain Marvel Jr. fought for the affection of Cassie Sandsmark, the new Wonder Woman, who chose Conner. His costume is very similar to the costume worn by Superman in the Kingdom Come (comic book) mini-series and Fleischer Studios's version of the character. After the reappearance of the future Titans, a second alternate version is introduced as a clone created by Tim Drake, who was created after Conner died battling Superboy-Prime. He and the other future Titans were sent by Luthor to make sure that their future still comes to pass as well as defeat an invading army of Starros. This future clone is later shot and killed by the future Batman (Tim Drake), eliminating that version of Conner from existing. However, another alternate future is shown where Tim decides he will take the mantle of Batman from Bruce Wayne by force and joins forces with Lex Luthor and Miss Martian. Seen behind the group are clones of Conner Kent and Bart Allen as well as an unknown female.

At first, Superboy's only superpower is "tactile telekinesis", a telekinetic force field that surrounds his body as a protective shield and allows him strength, flight and invulnerability. Tactile telekinesis also allows Superboy to disassemble machines and other complex constructions by pushing the field between the individual parts; alternately, he can, for short periods of time, hold such constructs together if they are coming apart. He can also manipulate aggregate solid masses such as volumes of sand or dust in the same way, causing the individual particles to fly apart in an explosive manner to create particle clouds or a forceful attack; he can also perform the same stunt with solid masses that are splintered, such as a cracked slab of concrete or fractured pane of glass. The tactile TK field also lets Superboy break free of an opponent's grip by pushing the field outward to force the opponent away. Other creative uses include rendering an opponent immobile by extending the TK field as long as they are both standing on the same ground; a variation on this is to extend the protection of his field to another person by touching them.

The main disadvantage of tactile telekinesis is that it is less effective in blocking energy (including fire and the resulting heat) than it is against solids, leaving Superboy slightly more susceptible to energy-based attacks. It is also less effective against gaseous materials and liquids. However, near the end of his series he was able to create an air pocket around himself enabling him to breathe in outer space. With only Tactile Telekinesis as his powers, at first, Superboy was only able to fly up to the speed of 500 mph or so. Although it has been shown that Superboy can fly up to speeds approaching mach 3. He even displayed the ability to launch objects at high velocities in excess of mach 5. He was equiped with goggles that gave him heat and X-ray vision but was destroyed short. Before his Kryptonian powers manifested; Kon-El couldn't run or move at superhuman speeds like Superman could; with only Tacile Telekinesis as his power. Kon-El finds out new ways to use his Tactile Telekinesis. Another plus to Superboy's Tactile Telekinesis is that he needs very little, or no yellow sunlight to power it. In The Final Night storyline; Earth's sun was being eaten by a Sun-Eater which severely weakened Superman but Superboy's power level remained the same.

As his Kryptonian physiology matures, Superboy gains superpowers that don't derive from tactile telekinesis, including heat vision, x-ray vision, and super-hearing. When the Titans encountered their future selves, he found he has greater telekinetic abilities (no longer limited to tactile telekinesis), he is stronger, more durable, and faster. Superboy later states that he has developed telescopic vision. It has also been shown in Teen Titans that he is much faster, traveling from San Francisco to the Arctic in less than an hour whilst carrying Nightwing. He was later able to have a footrace around the world with Kid Flash

Superboy, like Superman, derives his Kryptonian powers from the absorption of solar energy from the Earth's yellow sun. Conner, however, does not process solar energy as quickly as Superman. As a result, he cannot push himself and his powers too far; if he does so, his body starts to eat itself for energy. In the Hypertension storyline; Superboy meets his adult self from an alternate reality: Black Zero. Black Zero first plans to use an army of Doomsdays to defeat Superman. But when he is forced to eliminate the Doomsdays; Black Zero tells his men that "they were never essential to my plans". Implying that his power is equal to, or superior to those of Kal-El's. Like Superman, Superboy is also vulnerable to Kryptonian and magic.

In the Titans Tomorrow storyarc, the Kon-El Superman exhibits full Kryptonian abilities and full telekinesis with greater control of his telekinetic fields. In a fight with Captain Marvel Jr., he shields himself from a magic attack, an advantage the modern Superman has never had.

In Superboy's first appearance, he has a fade haircut, a modified Superman costume, two belts, an earring, gloves and a Leather jacket. His look was designed to be a pastiche of 1990s superhero costumes. His second costume is a slightly modified version of the first, with a new haircut and jacket. His third outfit is a more civilian look featuring jeans and a black S-shield T-shirt, much like the time he lost his powers, but sans the special gadgets and gloves. He sports a contemporary short haircut. In the "Superboy and the Legion" storyline, he dons the classic Superman costume, but with a Legion belt buckle. During the five months he spends in the future, he grows his hair to match Superman's.

Superboy acquires "super-goggles" from Professor Emil Hamilton after helping him. The goggles mimic most of Superman's vision powers, including heat vision, x-ray vision, and telescopic vision.

Even though DC Comics does not own the rights to the "Superboy" name, Geoff Johns and Dan DiDio have stated that the decision to kill off the character had nothing to do with the court case, and that they could have just renamed the character.

In the Teen Titans' Secret Origins, a back-up story in the weekly 52 (comic book) series, an illustration of Superboy had to be changed to one of Wonder Girl because of the legal dispute.

On the cover of Teen Titans #47, Match (DC Comics) insignia (a reverse version of Conner's) is obscured, and in Supergirl #18 (2007), Conner's "S" on his statue is covered. Almost all references to the character refer to him as "Conner". 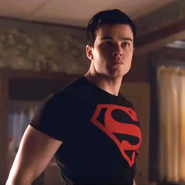 Cameron Monaghan
Reign of the Superman
Community content is available under CC-BY-SA unless otherwise noted.
Advertisement