Superman: The Wedding Album is a 1996 comic book one-shot that features the the long-awaited marriage of Lois Lane to Clark Kent/Superman— an historic event that was nearly 60 years in the making. Previous weddings involving the characters had all been hoaxes, dreams, or "imaginary" tales. The issue was published during the week of October 6, 1996, coinciding with the television series Lois & Clark: The New Adventures of Superman that also featured the wedding of the two characters in it's fourth season in episode 3 which was entitled "Swear to God, This Time We're Not Kidding". 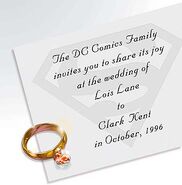