Superman III is a 1983 movie that was the third of four movies based upon the long-running DC Comics superhero produced between 1978-1987.

Christopher Reeve, Jackie Cooper, Marc McClure, and Margot Kidder are joined by new cast members Annette O'Toole, Annie Ross, Pamela Stephenson, Robert Vaughn, and Richard Pryor. The film was the last Reeve/Superman film produced by Alexander Salkind and Ilya Salkind. It was followed by Supergirl in 1984 and the non-Salkind sequel Superman IV: The Quest for Peace in 1987.

The film was less successful than the first two Superman movies, both financially and critically. Many fans of the series complained that there was too much emphasis on comedy, the villains were too weak, and that Christopher Reeve essentially played second fiddle to Richard Pryor. Following the release of this movie Pryor signed a deal with Columbia Pictures worth $40,000,000.

In this third installment, a computer genius named Gus Gorman (Pryor) is brought into the employ of Ross Webster (Vaughn), who has designs on ruling the world. However, all of his schemes are thwarted by Superman. Webster then orders Gorman to use his computer knowledge to create synthetic Kryptonite after remembering a Daily Planet story about the last original chunk disappearing years earlier after falling to Earth. (Whether Webster is referring to the Kryptonite robbery in Superman is unclear.) After scanning the coordinates of Krypton's former location via satellite, the results show a small percentage of an unknown component. The substitution of tar (which Gorman used after glancing at a cigarette carton) for a crucial, but unknown, component resulted in the synthetic kryptonite behaving like Red and Black Kryptonite: in this case, turning Superman evil and eventually split him into two people.

Bizarro and Clark Kent, the embodiment of Superman's remaining good qualities, engage in an epic battle at a deserted junkyard, where Clark emerges victorious and Bizarro fades from sight.

Later, Gorman's greatest creation, the Ultimate Computer, severely weakens Superman with a Kryptonite ray before Gorman has a change of heart and attacks his own machine. The computer starts to malfunction and Ross, his sister Vera and his girlfriend/assistant, Lorelei Ambrosia realize there's a danger. Ross and Lorelei are able to escape from the control room, but Vera is sucked into the huge circuitboard. The computer transforms her into a robot and she attacks the other two. Superman arrives, and destroys the computer, turning Vera back to normal. He then flies away, taking Gus with him.

There is a subplot in this film detailing Clark Kent's return to Smallville for his high school reunion, where he reconnects with Lana Lang (Annette O'Toole), an old childhood friend. Lana is now a divorcee with a son named Ricky (Paul Kaethler). Lana's former boyfriend Brad (Gavan O'Herlihy), a former jock and Clark's childhood bully, is now a security guard and is still vying for her attention.

The total domestic box office gross (not adjusted for inflation) for Superman III was $59,950,623. Thus, it was considered a major financial disappointment, since the first two movies each grossed over $100 million domestically. Besides a considerably poor feedback from the audience themselves, what also likely hurt the box office performance was the fact that Superman III was released during the same summer as Star Wars Episode VI: Return of the Jedi and the James Bond films Octopussy and Never Say Never Again.

Another problem may have been that the trailer seemed to spoil much of the movie itself. In July 1983, ITV showed the Royal Premiere of Superman III. This show included interviews with actors in the film who had flown to London for the United Kingdom and European premiere. Some clips from the film were shown, including where Superman is flying Gus to the coal mine and explaining how he used the acid to destroy the supercomputer, thus revealing the ending of the film.

A frequent criticism of Superman III is the inclusion of comedian Richard Pryor, who had the second biggest role in the movie behind Christopher Reeve. One website suspects that Pryor (who was riding on of the heels of smash hits like Stir Crazy and The Toy) helped himself into getting into Superman III after appearing on The Tonight Show and telling Johnny Carson about how much he enjoyed seeing Superman II.

Audiences also saw Robert Vaughn's villainous Ross Webster as an uninspired fill-in for the Lex Luthor role of Gene Hackman, who sat out Superman III due to his problems with the producers, the Salkinds. Hackman, along with Margot Kidder (Lois Lane), were angry with the way the Salkinds treated Superman director Richard Donner, and Hackman retaliated by refusing to reprise the role of Lex Luthor entirely (though he would later be persuaded to come back for Superman IV: The Quest for Peace in 1987 with which the Salkinds had no connection). The Salkinds retaliated against Kidder by severely reducing her role in Superman III.

In his commentary for the 2006 DVD release of Superman III, Ilya Salkind denied any ill will between Margot Kidder and his production team, and refuted the claim her part was cut for retailiation. Instead, he said, the creative team decided to pursue a different direction for a love interest for Superman, believing the Lois & Clark relationship had played out in the first two films (but could be revisited in the future). With the choice to give a more prominent role to Lana Lang, Lois's part was reduced for story reasons. Salkind also denied the reports about Gene Hackman being upset with him, stating he didn't return due to prior commitments. Similar to the Lois arc, Salkind felt the villianous arc would wear out, feeling fans would get sick of Luthor constantly breaking out of prison to yet again concoct a grandoise scam akin to incessant horror movie sequels where a serial killer keeps coming back from the grave to murder a new batch of victims.

Fans also placed most of the blame on director Richard Lester. Richard Lester made a number of popular comedies in the 1960s - including The Beatles' classics A Hard Day's Night (1964) and Help! (1965) and other hits such as The Knack ...and How to Get It (1965), A Funny Thing Happened on the Way to the Forum (1966) and Petulia (1968). Lester broke tradition by having Superman III opening up with a prolonged slapstick sequence (often compared with silent comedy) with difficult-to-read titles over it (the first two movies opened up in outer space with big and bold credits). Fans believed that Lester, unlike Donner, had virtually little, if any, knowledge or, more importantly, respect for the Superman legacy and legend. In fact, Richard Donner was supposedly fired because he wouldn't follow the Salkinds' vision of Superman being campy (a la the Batman television series starring Adam West). As a result, Superman III is commonly seen as more or less a goofy (albeit uneven) farce than a grandiose adventure picture like the first two movies.

Another criticism is of the screenplay, written by David and Leslie Newman. When Richard Donner was hired to direct the first two films he found the Newman scripts so distasteful that he hired Tom Mankiewicz for heavy rewrites. Since Donner and Mankiewicz were no longer attached to the franchise, the Salkinds were finally able to bring their "vision" of Superman to the screen and once again hired the Newmans for writing duties.

In his autobiography Still Me, Christopher Reeve had an overall low opinion about Superman III. While he acknowledged many sequels do not live up to their original, he personally felt that Superman II had surpassed Superman I in quality and fan appeal. However, Superman III was a poor successor to the second film. Part of the problem was writing. "The script for Superman I went through heavy rewrites. One idea in the original which was scrapped was where Superman in is pursuit of Lex Luthor and captures a bald-headed man, only to realize he has abducted Telly Savalas, who would then say 'Who loves ya, baby' and offer Superman a lollipop a la Kojak. Dick {Richard Donner} did away with much of that inanity". Reeve did speak highly of the fight between "evil Superman and good Clark Kent", but overall felt the film sacrificed too much for the sake of being giddy. Reeve also wrote "I did not think the scene of Richard Pryor spoofing Superman by falling down a skyscraper's edge on skis, with a pink tablecloth snagged on his back, was particularly funny".

Film critic Leonard Maltin said of Superman III that it was an "appalling sequel that trashed everything that Superman was about for the sake of cheap laughs and a co-starring role for Richard Pryor."

Superman III is sometimes praised for the performance of Reeve, playing a corrupted version of the Man of Steel, and a spectacular junkyard battle between this newly darkened Superman and Clark Kent.

The musical score was composed and conducted by Ken Thorne, using the Superman theme composed by John Williams. To capitalize on the popularity of synthesizer pop, Giorgio Moroder was hired to create songs for the film (though interestingly enough, their use in the film is minimal.)

Superman III was released on June 17, 1983 with a running time of 123 minutes in the United States and 117 minutes in the United Kingdom. The extended cut was first shown on ABC in 1986 with an extra 20 minutes of added footage (thus, making the running time 143 minutes). Just like with the previous two Superman movies, the television edition of Superman III was produced by Alexander Salkind's company. Until recently, this version had been distributed in American television syndication as part of Viacom's Superman syndication package which also features Supergirl and Superman IV: The Quest for Peace (full rights have since reverted to Warner Bros.). In the United Kingdom, the extended version has been shown about two or three times in the late 1980s.

The computer program that Gus Gorman created, which took the fractions of cents left over from financial transactions and interest compounding and transferred them to a dummy account, is actually a reasonable way to steal if security has been compromised. Most people do not manually balance their own books, and would thus not notice the missing penny. However, many corporations employ supercomputers that check for embezzling and also look for this action as well. Although some businesses do not hunt for "ghost pennies", others, namely banks, do often end up with fractions of a cent left over due to compounding interest on savings accounts. Thus, if a savings account that has a rate of 1.5% and principal of $155 compounds interest, the amount would be $2.325; many banks would pay $2.32 to the account holder and keep the half-cent left over as their cut.

The technique to embezzle fractions of a cent left over has not had a formal name, but it is known in slang as "salami slicing", and is illegal in many jurisdictions.

This aspect of the film has been one of the most referenced in popular culture. In the 1999 film Office Space, the characters use the same computer program that Gus Gorman used to make himself rich. They even mention how it's "just like in 'Superman III', which is kind of an underrated film, if you ask me." 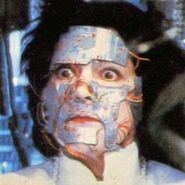