The Adventures of Superpup was a 1958 pilot for a children's series, following the end of Adventures of Superman. The star was heroic dog Superpup, alias reporter Bark Bent. In contrast to most animal spoofs of Superman, the series was authorized by Superman Incorporated, and thus Superpup wore the actual "S" on his chest and his superhero costume was otherwise identical to the Man of Steel's. The production crew included several staffers of the George Reeves series, notably producer/writer Whitney Ellsworth.

The pilot opens with a variant of the standard Superman intro (with the announcer noting that it's presented by "your product, the best of its kind in the world," as an appeal for sponsors), including shots of rockets and Superpup in flight. Montmorency Mouse appears and notes that only he and the audience know that Superpup is really Bark Bent, "star reporter for The Daily Bugle." Montmorency, who has a tendency to chatter "Ohboyohboyohboy" and "Goodygoodygoody" in a high-pitch, lives in Bark's drawer and serves both to goad him into action and to provide exposition and segues normally covered by the Narrator. He even explains continuity errors (as when the professor suddenly uses a different getaway car in the second half, explaining it was to avoid wrecking the first one which is newer).

At the newspaper building, Bark Bent is summoned to the office of growling bulldog editor Terry Bite. Bite compliments Bent and Pamela Poodle for their work in capturing sheepdog Professor Sheepdip, with the help of Superpup. Sheepdip is a villain in the mold of Lex Luthor's comics incarnation at the time, or any number of Superman mad scientists, bent on revenge.

Meanwhile, at the local jail (labeled simply as "JAIL"), the professor makes good his escape, with the help of a saw and his henchman Wolfingham (a wolf). Sergeant Beagle (despite the name, a sleepy-eyed bloodhound with an English accent) attempts to foil them with a toy cannon but fails, and his pursuit is similarly fruitless. While the Bugle staffers worry, the professor explains his plot to gain revenge on Bark Bent and everyone on The Daily Bugle. His new liquid bomb will blow up the building and everyone inside, and Sheepdip dispatches the oafish Wolfingham (hidden in a grandfather clock) to plant the explosive.

Back at the Bugle, Bark Bent and Montmorency Mouse discuss how he can recapture the professor. Beagle has made no progress, and Wolfingham enters, converses with Bite from within the clock, and finally asks for a match to light the bomb. A startled Terry Bite (finally aware of the bomb, as his eyes grow wide for one shot), calls a sleeping Bark in to solve the crisis. After a change into his costume (apparently behind a filing cabinet), Superpup bursts through a wall and proceeds to jettison office products until Bite furiously shows where the bomb is. Superpup flies the clock through the ear and drops it at the bottom of a cliff, where Professor Sheepdip just happened to be waiting. Terry Bite is still bellowing for Bark Bent and grumbling about the lack of help.

Foiled in his first effort, Sheepdip constructs a rocket and lures Pamela Poodle to his hideout, through a phony tip about a society party. When Montmorency passes on the tip, Bark realizes it's a ruse and (modulating his voice)changes to Superpup and rushes to the rescue. He unties Pamela from the rocket, just as it goes off. The rocket passes the good guys only to chase the villains. The car explodes and Sergeant Beagle and Terry Bite arrive in time for the arrest, as the sergeant notes they can't escape the long arm of the law. Superpup flies off while Pamela gazes up at him admiringly. The pilot closes with a final shot of Superpup in the air. 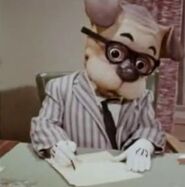 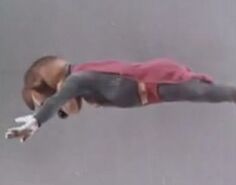 Superpup
Spoof of Superman (who else?) 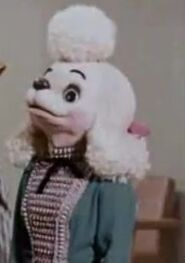 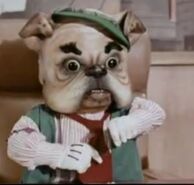 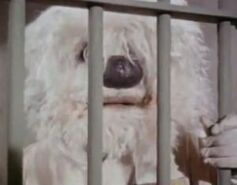 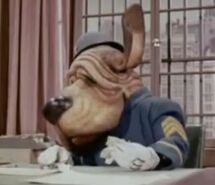 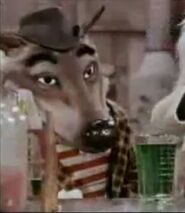 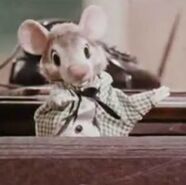 The concept presented an all-animal (mostly canine) world, with the characters played by little person actors in dog suits, some of which had minor puppet-like articulation for eyes, ears, or mouth. Montmorency Mouse is a hand puppet. Voice actor Dallas McKennon dubbed all of the male character voices, apart from the opening announcer. Of the costumed actors, Angelo Rossitto (the 1940s horror film veteran who played editor Terry Bite) and Harry Monty (the villainous Professor Sheepdip) would go on to perform in Sid and Marty Krofft's costumed series in the 1970s, such as H.R. Pufnstuf and Lidsville.

For the music score, only stock and public domain music was utilized. The William Tell Overture, already associated with heroics due to its use on The Lone Ranger, served the same function as the Superpup opening theme. Other cues and background music were taken from the Capitol Records stock library; concurrently, the same music could be heard in Hanna-Barbera's series (such as The Huckleberry Hound Show), Dennis the Menace, and Gumby, among others.

Although never aired on television, black and white copies of the pilot circulated and surfaced among fans and at occasional comic convention screenings from the 1970s onward. It also surfaced on unauthorized VHS tapes. In 2006, Warner Bros. released the pilot as a bonus extra on the DVD set Superman Ultimate Collector's Edition. This version used surviving color footage for most of the first half, and black and white for the remainder. The same extra was ported over to Blu-Ray for The Superman Motion Picture Anthology.

Retrieved from "https://superman.fandom.com/wiki/The_Adventures_of_Superpup?oldid=31458"
Community content is available under CC-BY-SA unless otherwise noted.