For other uses, see Superman (disambiguation)

Ultraman is an evil equivalent of Superman from a parallel Earth (called Earth-Three or Earth-3). He is a member of the Crime Syndicate, an evil version of the Justice League that terrorizes its Earth. His real name is Clark Luthor (according to Smallville), and is the adopted son of Lionel Luthor Earth-2.

During the Supergirl: Kandor storyline, Ultraman invaded the Bottle City of Kandor, posing as the city's god, Kal-El/Superman. He was opposed by Supergirl and Power Girl, who had taken up the identities of Nightwing and Flamebird.

During Final Crisis, Ultraman was part of the coalition of Supermen from the multiverse that helped to win the battle in the end.

In the New 52, Ultraman is one of the members of the Crime Syndicate and live on Earth-Three. Ultraman is Kal-Il, who comes from a version of Krypton whose people are mean-spirited and selfish. Unlike their other incarnations, they gain power when exposed to green Kryptonite. Just before this Krypton was destroyed, Kal-Il's parents Jor-Il and Lara sent him to Earth-3 to one day seek vengeance against the being that destroyed Krypton (whom Jor-Il inadvertently summoned), teaching him to become the strongest being on the planet, or to become nothing at all. Upon his arrival on Earth-3, the young Kal-Il coerced a young couple of alcoholic drug addicts Johnny and Martha Kent to adopt him, only to murder them years later once he had no further need of them. He went on to found the Crime Syndicate and take over the world. Ultraman is a violent, homicidal megalomaniac, as well as an elitist and Darwinist who values strength and selfishness, and hates weakness and altruism. After Earth-3 was devastated by the same being that destroyed Krypton-3, Ultraman led the Crime Syndicate to the Prime Earth to conquer it.

This version of Ultraman possesses the standard powers of a Kryptonian, only he is empowered by green Kryptonite (being able to crush it into powder and even snort it like cocaine) and is weakened by yellow sunlight. He was responsible for murdering Monocle when he claimed that the Crime Syndicate was the Justice League in disguise. Ultraman moved the moon in front of the sun to eclipse the Crime Syndicate's section of Earth as well as to protect himself from its rays.

The "New 52" version of Ultraman is shown as incredibly strong (fights Black Adam and swiftly defeats him), and is fairly impervious to "Shazam magic," which, in pre-New 52 continuity, is one of mainstream Superman's weaknesses (possibly because Ultraman comes from an alternate universe and is unaffected by magic of a different universe). Also Outsider mentioned that Ultraman has killed many gods from Earth-3. In the final battle, Ultraman engages Alexander Luthor but is beaten, Alexander leaves him to steal Deathstorm's powers. Ultraman later returns and attempts to attack Lex Luthor after he murdered Alexander Luthor only to be weakened after Sinestro and Black Adam move the moon and expose him to yellow sunlight. Lex Luthor opts not to kill Ultraman and kills Atomica instead. In the aftermath of the battle, Ultraman and Superwoman are in the custody of the authorities. He is seen sobbing in his cell.

During the Darkseid War storyline, Ultraman is released and given Kryptonite in order to battle the former Anti-Monitor: Mobius. When he attacks Mobius by himself against Superman's advice, he find himself overpowered. Mobius then kills Ultraman. 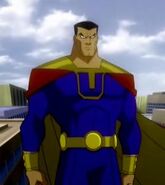 Clark Luthor as Ultraman
Smallville
Add a photo to this gallery
Retrieved from "https://superman.fandom.com/wiki/Ultraman?oldid=31573"
Community content is available under CC-BY-SA unless otherwise noted.